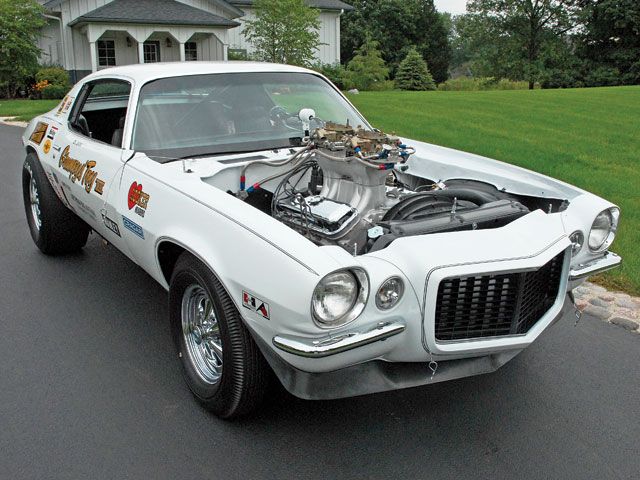 The recent passing of Vic Edelbrock, Jr., brought to mind the huge contribution Vic’s Edelbrock Equipment Company and others in the intake manifold game made to the science of all-out race engine power and the industry. The name Edelbrock cast into an aluminum intake manifold, or other products, meant excellent quality and power. Edelbrock remains an iconic, major speed equipment brand. Credit for that success belongs to Vic, Jr., and the great staff of hot rodders who helped to create the Edelbrock brand and culture.

Not only was Edelbrock the leader in intake manifolds, they were also responsible for bringing back to popularity several obsolete but formerly popular engine families. Long abandoned to junkyards and scrap metal recyclers, a number were resurrected by new Edelbrock aluminum cylinder heads. When that happened, other aftermarket firms responded with new products. Performance camshafts, valve train components, rods, pistons, crankshafts and other products returned these long-lost engines to the modern era.

The Edelbrock brand has been forever synonymous with the term “aluminum, high-rise, intake manifold”. For that reason, early racers turned to Vic Edelbrock, and then Vic, Jr., for bullets to fire during “The Manifold Wars”.

By 1968, Super Stock racers dissatisfied with S/S racing built cars with highly modified engines, completely outside the stock pieces required by S/S rules. These “outlaw” Super Stocks were called “Heads Up” cars, as they ran without handicap starts, and the hated break-outs. Heads-Up racing grew quickly, and by 1970, both NHRA and AHRA announced the creation of Pro/Stock (NHRA), and Super-Stock (AHRA). Both sanctions kept rules identical, to encourage participation.

One of the most recognizable features of these cars was their tall manifolds. These were cast aluminum, in the popular “Tunnel Ram” style, with long ram-tube runners. The drag racing community and fans responded with a huge wave of interest in the new category. Boosting this popularity was the return of popular pioneer drivers such as Dyno Don Nicholson, Eddie Schartman, Sox & Martin, Dandy Dick Landy, Butch Leal, Hubert Platt and Bill Grumpy Jenkins. They were joined by others eager to participate in the easy match race bookings offered by tracks. Promoters loved advertising heroes and crowds flocked to the multi-car shows.

Current intake designs for racing center around highly sophisticated, long-runner, hand fabricated and welded, “sheetmetal” manifolds. Not so in the earlier era. In those days, cast aluminum manifolds were preferred, hand-ported and highly modified. These modifications were performed to match port flow, engine speed, camshaft profiles, and of course, cylinder head modifications.

Edelbrock was usually the intake most preferred, followed closely by Weiand and Offy. Holley was the relative newcomer, introducing first their single 4-bbl intakes before the 2×4 manifolds in 1975.

Offy dropped off the charts by the mid 70’s, leaving the three prime time players to wage war against each other. The 1970 intro of Pro/Stock proved to be the flame attracting the moths, with trickle-down technology reaching Modified and Comp, where the mass sales were. Hundreds of Mod and Comp racers bought the latest Pro/Stock inspired manifolds for their weekend warriors. Sales were brisk, and included rub-off exposure for single four-barrel, street performance intakes.

Where once mechanical fuel injection systems by Hilborn, Enderle, Crower and Algon were common in unblown drag racing, the explosion of intake technology and development resulted in a mass switch to carburetors mounted atop a 2×4 intake, ala Pro/Stock. The carbs and highly modified intakes proved that they made more power and provided better driveability, critical in burn-outs and staging for racing. And because the carburetors had idle system metering, they stretched spark plug life, something not featured with mechanical FI systems. The term “Pro Stock technology” was coined to suit the new advancements largely brought on by the indefatigable engineering work of the manifold makers.

The hard-core, race market was limited, but the street performance market was enormous. Number One in any survey of potential performance street buyers was a high-rise, aluminum intake and carburetor, hands-down. The enthusiast magazines underscored this keynote, scheduling a manifold and carb installation story each calendar issue year!

The late 50’s Weiand “U-Fab” log manifold allowed racers to run with four, six or even eight Stromberg carbs mounted on a simple round tube manifold. It had no “ram effect”, but did increase power by adding multiple carburetors. This crude design could arguably be called “The Father of the Sheetmetal Manifold”! Cook & Bedwell and Don Garlits used these until they went with engines boosted via GMC 6-71 superchargers.

Most credit a single car with the successful use of the long ram tube intake design. That was the after-hours, drag racing team of Chrysler engineers and technicians known as The Ramchargers. With radiator hoses and clamps they built ram tubes that fed into a modified factory intake manifold. The 354 CID Hemi engine mounted a pair of Carter AFB four-barrels atop a sheetmetal plenum box with an outrageously large, bullhorn-shaped, scoop. The hemi heads were of course ported, and long, bell-ended tube headers hung outside the fenders of the ’50 Plymouth business coupe. It looked stupid, but the engineering minds that made up the club weren’t interested in curb appeal. They wanted brute power, and this Gyro-Gearloose, hodgepodge of parts delivered just that.

The ‘Rams contributions to drag racing are the stuff of folk lore, but their innovative, long ram-tube intake concept wasn’t seen again for several years. This was due to Chrysler discovering the added sales created by the racing efforts of The Ramchargers. That racing effort surfaced in 1961 when they fielded a very successful Stock class sedan, powered by a cross-ram equipped, 2×4 wedge Chrysler engine.

The cross-ram design took root and became popular, not just for Dodge and Plymouth racers, but Chevys and Fords. Edelbrock’s “Ram Log” spearheaded the rise of cross-rams for “other makes”. It also made Edelbrock the premier brand in the manifold market.

Ironically, it was the need to achieve clearance between hoods and carburetor tops that gave rise to the cross-ram. Cross-ram designs became popular, largely due to Dodge and Plymouth cars using 2×4 cross-ram intakes. These manifolds created required carb air intake hood clearance with a long runner intake, but several compromises were included. The tunnel-ram idea was better, from a pure power making standpoint, where clearance was available.

The long tube, ram intake was largely forgotten until 1965, when an innovative racer named Ralph Ridgeway shook up the racing intake field. Ridgeway, from Hartford, CT, took a Rochester manifold from a Fuel Injected Corvette, discarded the injectors, sawed off the top and fabricated a mounting box for a pair of AFB’s. His ’55 Chevy two door sedan ran in NHRA’s new C/Modified Production class. Carburetors were required, but intake design was not specified, making Ridgeway’s creation legal.

It was not only legal, but with a carefully built, 301 CID small-block Chevy, ported heads and a roller cam, the combination was world beating. Ridgeway dominated the class and won Street Eliminator at the ’65 Springnationals, in Bristol, TN. Suddenly, his intake manifolds were hot-ticket items. A “Ridge-Runner” cast aluminum intake followed, but the California based manifold makers were quick to answer the Eastern upstart.

Edelbrock’s first offering, the TR-1, (“Tunnel Ram-1”) featured a tall plenum box and long runners. Weiand soon followed with their own design. The Edelbrock box-plenum made good power, but in some applications the box became a “boom box”! An engine backfire on hot start up produced a sort of IED. Fires and injuries resulted. Many racers took to filling their plenum boxes with formed epoxy, to reduce the internal volume of the box, and fine-tune the shape, for more power.

The next Tunnel Ram generation was a great improvement, followed by a series of designs, each progressively addressing specific needs or advancements. Other components followed, and engine speeds increased. Small blocks climbed to 8,500-9,000, then 9.500 rpm and big blocks moved up from 7,000 to 8,000+ rpm. These advances were directly related to improved heads, cams and of course, intakes.

Edelbrock and Weiand continued to slug it out during the wartime, and the rivalry between the companies grew. Competition was fierce, but both firms enjoyed strong sales as racers were eager to grab the latest trick parts, to keep up with competitions in their own areas.

In the early 70’s Holley formed a marketing and engineering alliance with Edelbrock. Both firms benefitted until the relationship became strained. Holley jumped into the arena with the Dominator brand, produced with their own internal development. Holley also called upon the famous GM racing engineer, Zora Arkus Duntov to assist as a consultant.

Engineering development of intake manifolds plus related cylinder head, cam and valve train improvements continued to drive forward, focusing still on Pro/Stock, but benefitting all race categories. Edelbrock, Weiand and Holley made up the Top Trio, until the advent of specialized, hand fabricated sheetmetal intakes became all the rage. Racers took their que from the sheetmetal dominated Pro/Stock pits, and cast manifolds were replaced by welded aluminum intakes.

In 2016 Pro/Stock racing rules required use of electronic fuel injection, and a new chapter in the Manifold Wars began, although NHRA’s rules makers have reined in the creative technology of the race teams, and the rule book now calls the shots.